Future susceptibility to obesity is defined in the first day of life, by thyroid hormone. PMID: 26508642 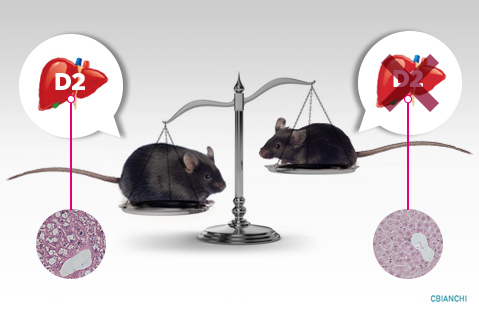 Thyroid hormone has an important metabolic role. It affects multiple aspects of our body, including appetite, fat storage, blood levels of lipids and the energy expenditure. Some of these effects happen in the liver, an organ known to be regulated by thyroid hormone. Recent studies indicate that on the first day of life, the mouse liver undergoes very specific changes that define how the whole animal will respond in the future to a diet containing an excess of calories, i.e. whether it will become obese or not. This mechanism is controlled by thyroid hormone.

Thyroid hormone is secreted mostly as an inactive molecule known as T4, which must be activated to T3 outside of the thyroid gland. This activating step is mediated by enzymes known as deiodinases that are present in various organs and tissues. D2 is a deiodinase that enhances thyroid hormone impact in metabolic tissues as it activates T4 to T3 deep inside the cells, and the T3 molecule has a greater chance to affect the very same cell where it was produced. As it turns out, the newborn mouse liver exhibits a marked peak of D2 activity so that the liver is briefly exposed to a transient pulse of T3. This brief peak of D2 and T3 modifies the expression of ∼165 genes involved in broad aspects of liver function, including lipid metabolism. Remarkably, in the following days D2 disappears from the liver, not to return under normal circumstances.

In normal adult mice fed a high fat/calorie diet, the liver responds by modifying the expression of approximately 400 genes that mediate production of fat. In contrast, in mice engineered to eliminate the brief neonatal D2 peak, preventing the first day pulse of T3, only about 200 genes are affected by a high fat/calorie diet, genes that are largely linked to reverse cholesterol transport and lipid breakdown.

In depth studies of the liver genome indicate that the neonatal peak of D2 and T3 modify the future gene expression through what is known as epigenetic mechanisms, specifically DNA methylation. An analysis of the liver methylation pattern in these animals revealed that 10–20% of the differences in gene expression are related to the existence of DNA regions that are methylated differently when compared to the control animals.

We have a tendency to think of thyroid hormone as molecules that circulate in blood at steady levels, equally entering all cells to cause a biological effect. These studies illustrate how a lot goes on inside cells affecting thyroid hormone action, which cannot be detected or analyzed just by looking at circulating levels of T4 or T3. In this case, disrupting such a key mechanism results in a dramatic phenotype in the adult ALB-D2KO mouse, with greatly reduced susceptibility to liver steatosis, high blood levels of lipids, and obesity.