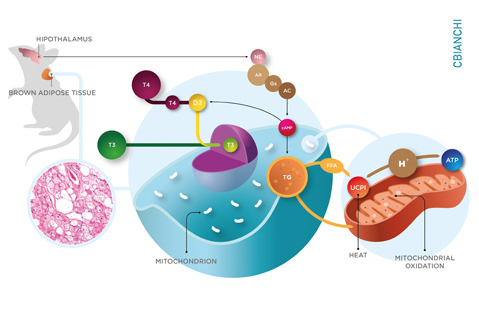 Thyroid hormone acts in virtually all tissues accelerating the rate of energy expenditure and production of heat. The importance of thyroid hormone in temperature regulation is illustrated by the fact that hypothyroid patients frequently exhibit cold intolerance and, in some cases, can also experience hypothermia. In small rodents (and perhaps humans as well) this is largely explained by the positive effects of thyroid hormone on brown adipose tissue (BAT), an organ that is capable of intense heat production.

BAT is a source of heat for wild mammals, so critical during the winter months. In the BAT heat is generated due to mitochondrial uncoupling triggered by the sympathetic nervous system, i.e. norepinephrine. The sympathetic activity also stimulates D2 whenever BAT is activated, increasing the tissue T3 and creating a state of localized “thyrotoxicosis” at the same time that the level of circulating T3 remains fairly constant. This leads to the induction of T3-responsive thermogenic genes including the uncoupling protein. D2-generated T3 also stimulates synthesis of fatty acids in the brown adipose tissue, utilized to sustain the high mitochondrial activity. These D2-dependent pathways are so important that survival of Dio2 null mice in the cold requires shivering, a behavior not normally seen in small rodents. The D2 pathway develops very early and is already functional in mouse embryos. The BAT of Dio2 null embryos has decreased expression of genes defining the tissue thermogenic identity [i.e. UCP1, PGC-1alpha and Dio2], and exhibits impaired differentiation and oxidative capacity.

Evidence for a role for D2 in the control of metabolic pathways was provided by the discovery that bile acids can confer resistance to diet-induced obesity in mice via activation of the D2 pathway in the BAT and skeletal muscle. Binding of bile acids to the plasma membrane G protein-coupled receptor TGR5 mimics sympathetic activation in BAT and leads to D2 expression, mitochondrial uncoupling dissipation of the excess energy as heat. As a result, mice kept on a high-fat diet that is supplemented with bile acids do not gain weight or become as insulin resistant. This protective effect against diet-induced obesity is lost in Dio2 null mice. In addition, other molecules were found to induce D2 expression when given daily to mice, including flavonols and chemical chaperones. Exposure of brown adipocytes to the chemical chaperones tauroursodeoxycholic acid (TUDCA) or 4-phenylbutiric acid (4-PBA) increases D2 expression and T3 production, accelerating oxygen consumption by about 2-fold, an effect partially lost in Dio2 null cells. When given to mice, these molecules accelerated fatty acid oxidation and normalized the glucose intolerance associated with high fat feeding. The small polyphenolic molecule kaempferol (KPF) triggeres similar effects, illustrating how an environmental molecule can regulate metabolically important genes as well as thyroid hormone activation and thus may influence energy homeostasis in humans.

A surge of D2 activity is found in the liver on the first day of life, dissipating to background levels in adult animals. This pulse of D2-mediated T3 production promotes epigenetic modifications of the liver transcriptome that remain throughout during adulthood. These changes decrease the expression of genes that export lipids from the hepatocytes into the circulation, e.g. lipoproteins and other proteins involved in lipid transport, modifying the susceptibility of animals to diet-induced obesity and liver steatosis.