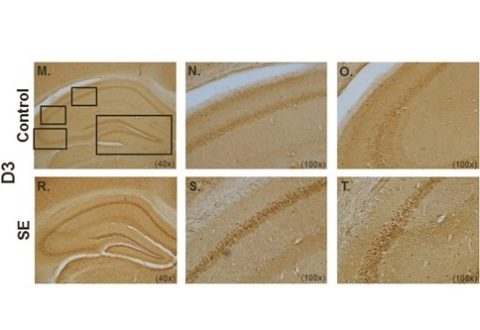 Status epilepticus (SE) is an abnormally prolonged seizure that results from either a failure of mechanisms that terminate seizures or from initiating mechanisms that inherently lead to prolonged seizures. Here we report that mice experiencing a 3 hours of SE caused by pilocarpine exhibit a rapid increase in expression of type 2 iodothyronine deiodinase gene (Dio2) and a decrease in the expression of type 3 iodothyronine deiodinase gene in hippocampus, amygdala and prefrontal cortex. Type 3 iodothyronine deiodinase in hippocampal sections was seen concentrated in the neuronal nuclei, typical of ischemic injury of the brain. An unbiased analysis of the hippocampal transcriptome of mice undergoing 3 hours of SE revealed a number of genes, including those involved with response to oxidative stress, cellular homeostasis, cell signaling, and mitochondrial structure. In contrast, in mice with targeted disruption of Dio2 in astrocytes (Astro D2KO mouse), the highly induced genes in the hippocampus were related to inflammation, apoptosis, and cell death. We propose that Dio2 induction caused by SE accelerates production of T3 in different areas of the central nervous system and modifies the hippocampal gene expression profile, affecting the balance between adaptive and maladaptive mechanisms.