Genetic flaw causes problems for many with hypothyroidism. PMID: 30352046 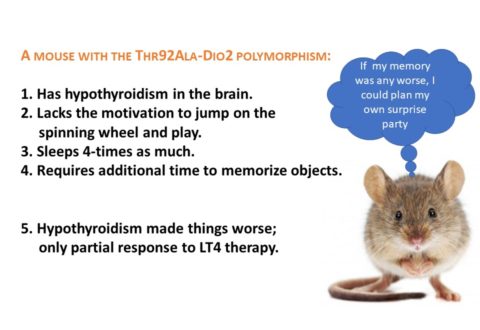 Most patients who suffer from hypothyroidism respond favorably to treatment with levothyroxine. However, about 15% of the patients remain symptomatic despite taking the medication. In a study using mice, investigators found compelling evidence that the problem could be in a deiodinase gene polymorphism. This genetic flaw alters a key enzyme that activates T4 to T3. Patients carrying this polymorphism have a single-nucleotide substitution in the D2 gene. As a result, the amino acid threonine located in a critical position within the deiodinase molecule is replaced by a different amino acid, alanine.

This amino-acid switch, known as the Thr92Ala-DIO2 polymorphism, results in a misfolded D2 protein, which is less active. It converts some T4 to T3, but the result is a decrease in the amount of available T3. The brain of mice carriers of the polymorphism exhibits signs of hypothyroidism; specifically in the striatum, pre-frontal cortex and amygdala, areas involved in motivation and decision making-processes. They sleep four times as much during day and night. They stay quiet, don’t move around much. They lack the motivation to jump on the spinning wheel and play. They also exhibit memory problems.

To confirm this, investigators treated these animals with T3, and many of the aspects indicating hypothyroid-like behavior were normalized. Unfortunately, long-term treatment with T3 has its drawbacks. T3 has a short half-life. The tablets are rapidly absorbed, which causes levels to spike in the blood. This can induce palpitations, even at low doses, plus anxiety, sweating and tightness of the chest.

Hopefully, understanding these mechanisms will accelerate development of new therapeutic approaches for the millions of patients with hypothyroidism, and provide justification for clinical studies to assess the utility of customization of thyroid replacement therapy based on their Thr92Ala-DIO2 status.