Why is it so hard for patients on levothyroxine to lose weight? PMID: 26499800 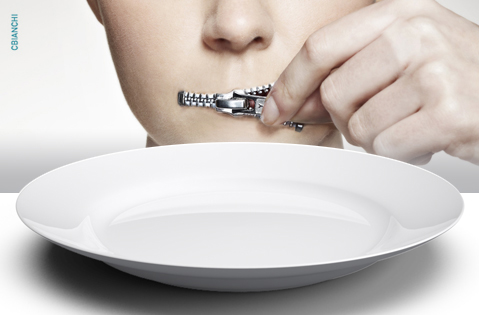 Do you know what happens when you decrease the number of calories you ingest everyday, for example, when you go on a diet? The body fights back, trying to hold on to its energy stores, aka fat. The way this happens is by gradually slowing the rate of energy expenditure. The slower metabolism is driven by the brain and saves energy. It is accompanied by behavioral and metabolic modifications, such as increased sleep, diminished motor activity, and body temperature. Some of these changes are also due to decreased blood levels of a key molecule, i.e. thyroid hormone. The novel finding is that conversion of T4 to T3, the active thyroid hormone, is greatly reduced when you cut down calories.

Thyroid hormone accelerates metabolism and a reduction in its levels lowers energy expenditure, explains the slowdown in weight loss seen during caloric restriction. Of course, thyroidal hormone levels are restored promptly upon normalization of caloric intake, and so is the rate of metabolism. Thus, the body’s intrinsic response to food and food deprivation couples thyroid hormone levels to nutrient availability, balancing caloric intake with the metabolic processes.

Food intake and the size of the fat depots are signaled to the brain via two important molecules, i.e. insulin and leptin, respectively. Insulin levels rise in the blood after a meal and signals to the brain that nutrients such as sugars and amino acids are coming into the circulation. Leptin is produced by fat cells and obese individuals have higher levels of leptin. The brain monitors these two molecules in the circulation and adjusts hunger vs. satiety as well as the rate of metabolism via thyroidal activity and other factors. Lower leptin levels reduce production of TRH and TSH, two molecules that normally stimulate the thyroid gland to secrete thyroid hormones, T4 and T3.

Outside the thyroid gland, T4 is converted to T3 and thyroid effects occur in all tissues. Enzymes known as deiodinases convert T4 to T3, producing almost all T3 found in the circulation. In new studies performed in mice and in cultured cells, caloric restriction and low levels of insulin have been found to also slow down T4 to T3 conversion by silencing the gene that encodes the type 2 deiodinase (D2). This is how it works: D2 normally produces about 2/3 of all T3 found in the circulation. When caloric intake is low (low levels of insulin) a molecule known as FOXO1 sits on the D2 gene and inhibits its function, reducing T3 production and its levels in the circulation. Normalization of caloric intake and insulin activate signals within cells that prevent FOXO1 from biding to and inhibiting the D2 gene. This normalizes D2 function and restores T3 production. The skeletal muscle and brown adipose tissue are sites where FOXO1-mediated D2 regulation and T3 production occurs.

These findings might explain why many hypothyroid patients that are kept on levothyroxine-replacement therapy (L-T4) struggle with maintaining body weight. The thyroid gland of a hypothyroid individual does not function adequately and almost all circulating T3 comes from the D2 pathway. This makes hypothyroid individuals more likely to be affected by rapid changes in caloric intake. Diabetic patients might also be affected. Given that D2-mediated T3 production is regulated by insulin, it is also conceivable that blood levels of T3 in diabetic patients fluctuate more rapidly as a result of insulin administration or changes in insulin sensitivity.