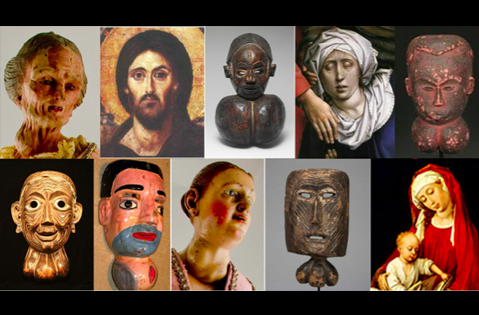 Enlargements of the thyroid gland (goiter) have been noted in texts and paintings for centuries but it wasn’t until the mid-late 1800’s when physicians started to connect thyroid gland abnormalities with the constellation of clinical findings comprising the syndrome of myxedema, or hypothyroidism as it is known today. In the early 1890’s, different strategies were used to treat severe myxedema, including a lightly cooked sheep thyroid for breakfast daily or oral administration of thyroid extracts. The efficacy was profound – hypothyroidism, a previously crippling and sometimes fatal disease, could be successfully treated with thyroid preparations. These pioneering observations led scientists to the pursuit of the chemical compounds that define thyroid hormone.

The chemist Eugen Baumann, inventor of PVC, working at the University of Freiburg, Germany, took on this project and started the process of purification of thyroid extracts. In a little over one year he discovered that the thyroid extract contained large amounts of iodine incorporated in a protein that he named iodothyrin. The iodine-rich extract was useful for the treatment of hypothyroid patients, but otherwise lacked purity and its exact chemical makeup was unknown. However, his work was interrupted by his sudden death in 1896.

About 15 years later Edward Kendall, also a chemist, began working at Parke-Davis in Detroit and was assigned the task of further purifying Baumann’s thyroid extract where he took a genuine interest in the project. Frustrated with the corporate life he was eventually attracted to the Mayo Clinic, where the Mayo brothers cultivated a strong interest in the thyroid gland and in purification of other hormones, including cortisol. At the Mayo Clinic, Kendall resumed his work on thyroid extracts in February 1914 and by December, after processing 6,500 pounds of hog thyroid, he was close to isolating the compound.

On December 23, 1914 as the temperature outside was negative 6°F and the ground covered with snow, Kendall fell asleep in the laboratory while drying thyroid extracts prepared in ethanol. When he woke up he saw that the ethanol had evaporated leaving a white crusty residue surrounded by a yellow ring at the bottom of the beaker. He added fresh ethanol which dissolved the yellow waxy material, but the white crust remained insoluble. The crust was analyzed and found to contain about 60% iodine, so he knew he had the active thyroid principle. On Christmas morning Kendall finally got the white crust into solution by using ethanol spiked with sodium hydroxide and obtained crystals by adding a few drops of acetic acid. He named these crystals thyroxin and used them to successfully treat hypothyroid patients. Despite Kendall’s exhaustive efforts over the next decade to solve the chemical structure of thyroxin, it was Sir Charles Harrington of University College, London who in 1926 identified the molecular structure and synthesized in laboratory the compound he renamed thyroxine, aka levothyroxine or T4 for its 4 atoms of iodine.

Some two decades later it was clear that there was a piece missing in the thyroid puzzle as thyroxine alone could not account for all biological properties of thyroidal activity. Working at McGill University in Montreal, Jack Gross and colleagues injected rats with radioactive iodide and analyzed thyroid extracts and serum for radiolabeled products. Whereas the majority of labeled products were identified as T4, the presence of an unknown radiolabeled molecule was also observed. In 1950 Gross joined the laboratory of Sir Harrington’s mentee, Rosalind Pitt-Rivers, at the National Institute for Medical Research in London. In a series of elegant studies, Gross and Pitt-Rivers detected the “unknown” radiolabeled substance in the blood of patients treated with radioactive iodide, verified that it behaved biochemically just like synthetic T3 and later isolated it from ox thyroid. T3 has similar molecular structure as T4 except that it lacks one atom of iodine in the phenolic (outer) ring. At almost the same time, a group of investigators at the Collège de France in Paris including Jean Roche, Serge Lissitzky, and Raymond Michel, also identified radioactive T3 in thyroid extracts from rats given radioactive iodide.

In subsequent studies, Gross and Pitt-Rivers found that T3 was about three times more potent than T4; this led them to speculate in 1953 that T3 was the active form of the thyroid hormone. However, a number of inconsistent results and technical limitations generated doubt in Pitt-Rivers’ mind about the proposed role of T3. Steps towards clarifying its role were made in the early 1970s, when Lewis Braverman, Sidney Ingbar and Ken Sterling working at laboratories in Boston and New York unequivocally demonstrated that T4 is converted to T3 in athyreotic patients. Thus, not only are T4 and T3 both produced and secreted from the thyroid gland, but physiologic mechanisms allow for conversion of T4 to T3 in individuals without functioning thyroid glands. A few years later Jack Oppenheimer and colleagues, as well as Herb Samuels and colleagues (all in New York institutions) identified thyroid hormone receptors located within the cell nucleus, and found them to have much greater affinity for T3 than T4.

These findings constitute the basis for the pharmaceutical grade of T4, i.e. levothyroxine, as today’s standard of care for the treatment of hypothyroidism. Of course there is much debate and current research on whether levothyroxine alone fully restores euthyroidism in ALL hypothyroid patients. Nevertheless, levothyroxine has been successfully used by hundreds of millions worldwide to survive a once devastating disease. The discovery and refinement of this life-saving compound was only possible through a century of collaborative investigation of great minds in thyroid research.