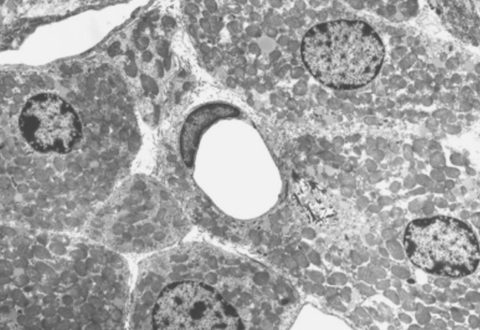 Fat tissue, or adipose tissue, has diverse hormonal, structural, and metabolic roles and can even be thought of as an organ in itself. The constituents of the adipose organ include two different types of fat cells, white and brown adipocytes, which demonstrate considerable differences in terms of their physiologic function.

White adipocytes store energy efficiently while brown adipocytes expend energy and through this process produce heat. The ability of white adipose tissue (WAT) to provide efficient energy storage persists in humans in the pathologic extreme such that in the setting of chronic energy excess, i.e. in overfeeding relative to insufficient physical activity, WAT can expand resulting in the pathologic state of obesity. Obesity can have significant health consequences as it predisposes individuals to the development of type 2 diabetes mellitus, cardiovascular disease, stroke, hypertension and cancer. Unfortunately, adoption of chronic sedentary lifestyle and overeating on the population scale has resulted in the emergence of obesity as an epidemic that has led physicians and scientists to search for novel therapeutic strategies. Brown adipose tissue (BAT) expends energy resulting in heat production thus playing an important role in temperature maintenance in small mammals and neonates but, until recently, was thought to be irrelevant in the adult human. This paradigm has shifted as we now recognize that metabolically active BAT is not only present in the adult human, but responds to stimuli including temperature, diet, thyroid hormone and certain medications. The presence of functional BAT in adult humans has reawakened scientific interest in the field and, as a result, the role of BAT in adult humans is increasingly well defined.

Thyroid hormone is produced by the thyroid gland and circulates to target tissues where it exerts if effect by binding to thyroid hormone receptor inside of cells. Thyroid hormone accelerates metabolism and energy expenditure through multiple mechanisms, one of which is through activation of BAT. Results of complex cellular and animal models have demonstrated that thyroid hormone is necessary for BAT to develop and function properly. In fact, BAT is one of the unique tissues that contains the type II deiodinase, the enzyme that generates active TH within the brown adipocytes, triggering thyroid hormone-dependent, energy-expending pathways. The presence of this enzyme within brown adipocytes effectively ensures the cells will have the thyroid hormone they need to function and further supports our understanding of the critical relationship between thyroid hormone and BAT.

Future research in this area will focus on methods to safely activate brown fat with the intention of accelerating energy expenditure and thus treating or preventing obesity. The answer isn’t just as simple as giving patients thyroid hormone–prior studies in which attempts to administer thyroid hormone to induce weight loss were confounded by irregular heart rhythms, bone loss and breakdown of muscle and thus administration of thyroid hormone should not be considered a strategy to accelerate metabolism in itself. Other promising therapeutic leads include stimulation of specific thyroid hormone receptors within brown adipocytes, induction of precursors of brown adipocytes, and transformation of white adipocytes into brown adipocytes (termed ‘browning’ of white fat). If the energy expenditure of BAT can be harnessed in adult humans, obesity therapy will be revolutionized, and the critical role of thyroid hormone in this process is sure to take center stage.