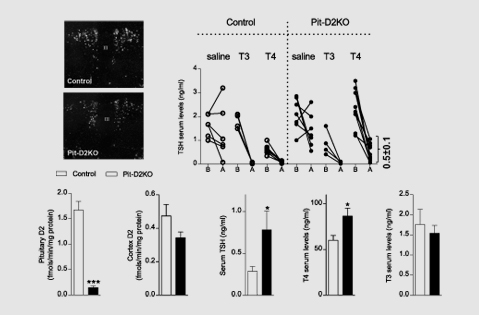 Type II deiodinase (D2) activates thyroid hormone by converting thyroxine (T4) to 3,5,3′-triiodothyronine (T3). This allows plasma T4 to signal a negative feedback loop that inhibits production of thyrotropin-releasing hormone (TRH) in the mediobasal hypothalamus (MBH) and thyroid-stimulating hormone (TSH) in the pituitary. To determine the relative contributions of these D2 pathways in the feedback loop, we developed 2 mouse strains with pituitary- and astrocyte-specific D2 knockdown (pit-D2 KO and astro-D2 KO mice, respectively). The pit-D2 KO mice had normal serum T3 and were systemically euthyroid, but exhibited an approximately 3-fold elevation in serum TSH levels and a 40% reduction in biological activity. This was the result of elevated serum T4 that increased D2-mediated T3 production in the MBH, thus decreasing Trh mRNA. That tanycytes, not astrocytes, are the cells within the MBH that mediate T4-to-T3 conversion was defined by studies using the astro-D2 KO mice. Despite near-complete loss of brain D2, tanycyte D2 was preserved in astro-D2 KO mice at levels that were sufficient to maintain both the T4-dependent negative feedback loop and thyroid economy. Taken together, these data demonstrated that the hypothalamic-thyroid axis is wired to maintain normal plasma T3 levels, which is achieved through coordination of T4-to-T3 conversion between thyrotrophs and tanycytes.